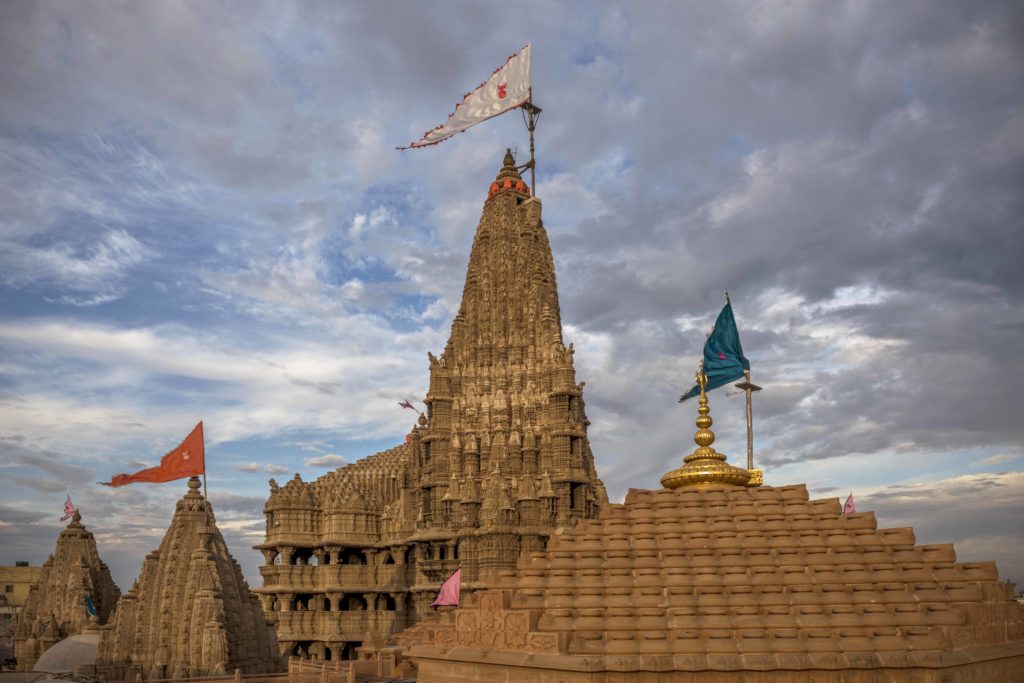 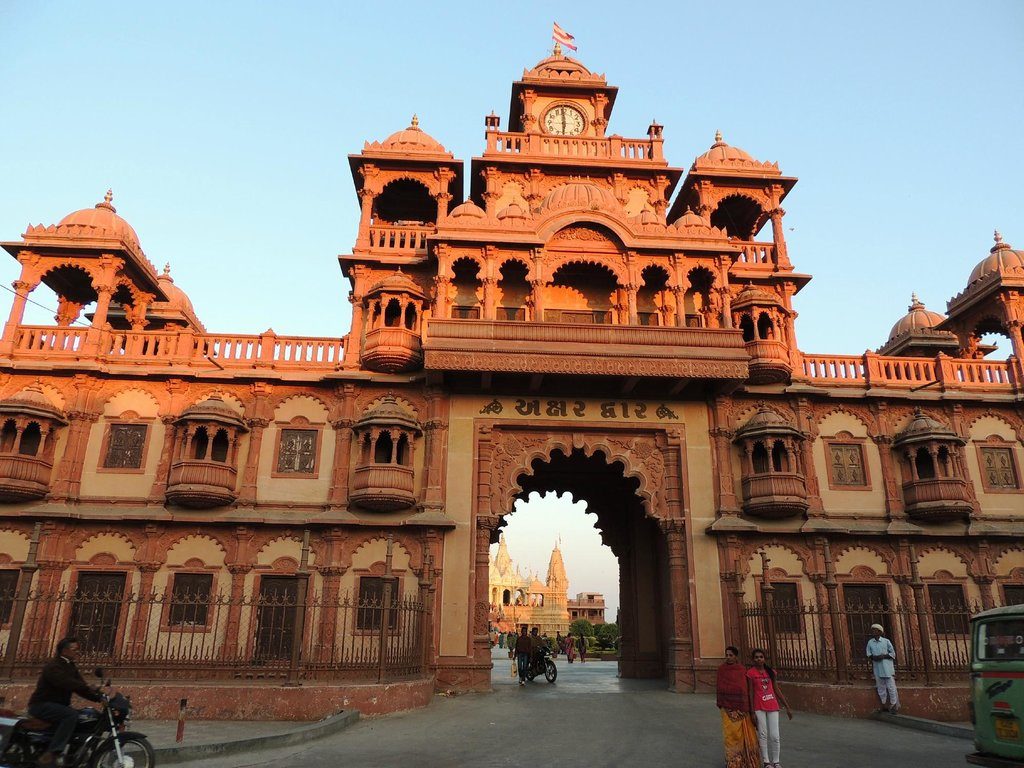 The principal temple of Somnath is believed to have been built in gold by the moon god Soma, in silver by the sun god Ravi, in wood by Krishna and in stone by the Solanki Rajputs in the 11th century. The present temple, built in 1951, is the seventh reconstruction on the original site. Tales of its riches attracted a series of invasions, but each time the temple was invaded, it was restored to its original glory by devout Hindu worshipers. Commanding a breathtaking view from the tip of the Saurashtra peninsula, kissed by the waves of the Arabian coast, the temple has been constructed in the Chalukyan style with a shikhara nearly 50 m tall. The temple’s imposing architecture includes intricate carvings, silver doors, an impressive Nandi idol and the central shivalinga. In the vast courtyard stand the massive mandapa (hall), as well as the main shrine, whose gently curved pyramidal forms tower over the whole complex.

Through a side door the sea is visible shimmering in the sunlight. Try slipping out to gaze at the roaring waves below, which though not safe for swimming, present an exhilarating spectacle. In view, you will find a tower called Deep Stambha erected on the embankment. On the top is a shape like a conch shell on its side, and in the tower is an arrow pointing directly to the south pole (interestingly, a line between here and the south pole crosses no land until Antarctica.)

The main temple at Dwarka, situated on Gomti creek, is known as jagat mandir (universal shrine) or trilok sundar (the most beautiful in all the three worlds). Originally believed to be built by Vajranabh, the great grandson of Lord Krishna, more than 2500 years ago, it is a glorious structure seeming to rise from the waters of the Arabian Sea. Its exquisitely carved shikhar, reaching 43 m high and the huge flag made from 52 yards of cloth, can be seen from as far away as 10 km. The grandeur of the temple is enhanced by the flight of 56 steps leading to the rear side of the edifice on the side of the river Gomti. The temple is built of soft limestone and consists of a sanctum, vestibule and a rectangular hall with porches on three sides. There are two gateways: swarga dwar (gate to the heavens), where pilgrims enter, and moksha dwar (gate to liberation), where pilgrims exit.

The lower part of the Dwarkadhish temple is from the 16th century and the soaring steeple with its numerous clusters of small towers is from the 19th century. The main part of the temple has five storeys, reaching to a height of over 100 feet. The exquisite carvings on its exterior display daring eroticism, a multi-layered mythic intensity and extraordinary continuity of design. In contrast, the interior of the temple is striking in its simplicity, with the only exception being the elaborate ornamentation around the shrine to the idol of Dwarkadhish.

Today, proceed to Jamnagar. On arrival visit Lakhota Lake & Lakhota Museum. In the evening, visit Bala Hanuman Temple known for its nonstop Ramdhun since 1956 and it mentioned in Guinness Book of World Records. Evening is free for Shopping. Overnight stay at the hotel.

In the morning depart to Porbandar (75km/1.5hrs) at Porbandar visit Kirti Mandir – the place where Gandhiji was born. Later proceed to Somnath (130km/2.5hrs) on arrival visit Bhalka Tirth, Triveni Ghat & Somnath Temple. In the evening attend Aarti and later watch light and Sound show. Overnight stay at the hotel.